A Brief History of Cycling 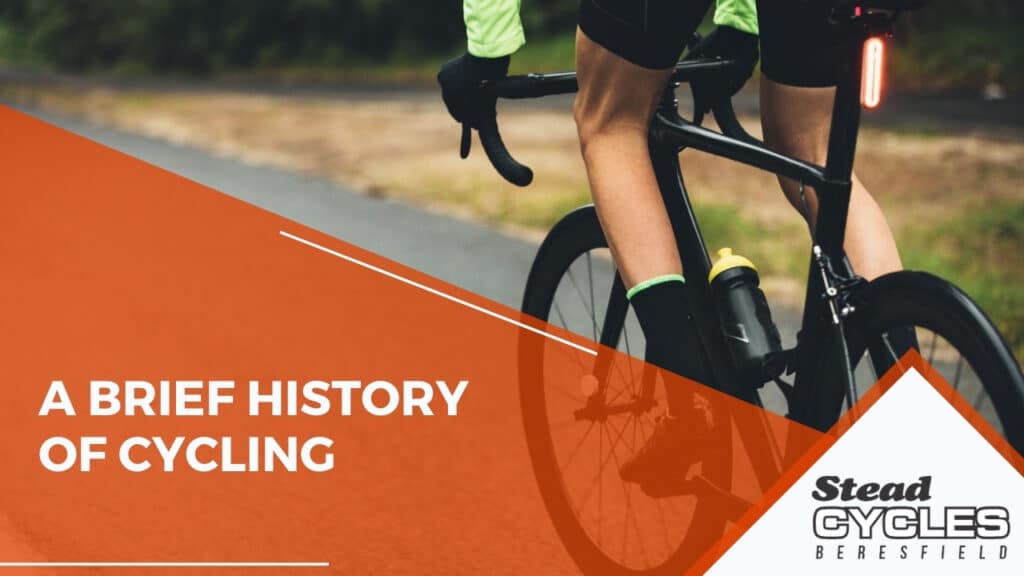 Tracing the story of how cycling came to be.

A bicycle is an integral part of our lives. It serves as a cheap and easy means of transportation for billions of people around the world. It is easy to maintain and also helps the environment by decreasing air pollution, noise pollution, and traffic congestion.

Thanks to the efforts of inventors and engineers over several centuries, the bicycle developed into the ubiquitous means of transport we have today. Read on to know how this ground-breaking device became part of our society.

The First Bicycle Ever Made

Karl von Drais, a German baron, is widely known as the father of the bicycle. In 1817, he developed a two-wheeled, steerable, machine. The 50-pound wooden clunky prototype did not have chains, brakes, or pedals. The rider propelled the frame forward by pushing it off the ground with their feet. Drais’s called his invention Laufmaschine (running machine) was known by different names such as ‘hobby horse’, ‘running machine’, ‘velocipede’, and ‘draisine’.

Although it looks clunky to modern eyes, this was commercially successful and foot propelled machines of this type where being used as late as 1866.

Evolution of Bicycles through the Ages

Although velocipedes remained in use, innovation was moving the bicycle forward. Other inventors were inspired to make improvements on the prototype. These are the most notable developments over the years:

In 1863, Pierre Michaux from France had the idea of adding cranks and pedals to the velocipede’s front wheel. The impact of the bike’s metal-rimmed wheels and wooden body on the cobblestoned street produced violent shakes for the user while riding it. This led to this version of the machine that earned the nickname ‘boneshaker’.

The Penny-farthing was created to resolve the uncomfortable shake produced by the boneshaker. It featured a big front wheel that permitted the rider to achieve greater distance with one tyre, a steel frame, ball bearings, spokes, and solid rubber tyres. Known as the first high-wheeled bicycle, the improvements introduced by this bicycle led to better speed and a smoother ride.

·  The Rover or safety bicycle

John Kemp Starley developed the Rover in 1885 and helped cycling really rise in popularity as a sport, recreation, and mode of transportation. Starley combined and built on the innovations developed over the years to produce a truly functional machine.

The most significant improvement he did was add the chain and gear. This led to chain-powered pedalling that removed the need for an unstable and oversized front wheel. The result was a bicycle that closely resembles those you see today.

The Role of Cycling Growing through the Ages

The role of cycling in society grew from being just a mode of transportation. Today, it is also considered as both a sport and a form of recreation.

Cycling as a sport

·  The early history of the sport

Cycling officially began as a sport on 31 May, 1868, with a 1,200-metre race between the entrance and fountains of Saint-Cloud Park in Paris. The United States followed suit with its first recorded race on 24 May, 1878.

An intense form of racing also became popular in the United States. They organised a competition that lasted for six days with an international field of riders as participants. Prizes reached up to $10,000.

This type of racing evolved from one-person teams to two-person teams in 1899. At present, these types of races are no longer held in the United States. However, they continue to be popular in France, Italy, Belgium, and France.

The Union Cycliste Internationale (UCI) is the entity responsible for governing the sport of cycling. Countries may also have their own cycling federations. The scope of the competition has now grown much larger.

Amateur races are now conducted for both men and women in local, regional, and national competitions. Age group categories were also extended, starting from 12-13 years old.

Amateur men are also no longer separated from professionals in events. However, they are usually divided into two groups: those aged below 23 (called espoirs or hopefuls) and those 23 and above.

Australians also place strongly in the sport at the UCI World Championships, Olympic Games, and other international cycling events.

Cycling as a recreation

Cycling was established as recreation right from the beginning. It served as a means to bring men and women together in an unchaperoned manner during its early days. Some questioned the morality of this activity, and of women’s cycling attire which became less restrictive.

Research shows that cycling is an effective way to become physically active. Fitness campaigns such as Ride to Work day encourage people to add more cycling to their routines.

The usual cause people cite for physical inactivity is not having enough time for exercise. That is why incidental exercise for at least 30 minutes a day is encouraged. It means incorporating exercise in daily activities such as walking to the train or bus. Cycling as a means of transportation is one way to achieve this.

The National Cycling Strategy was created in Australia and aimed to double the number of people cycling from 2011 to 2106. It was noted that cycling was more popular in the Australian Capital Territory, Northern Territory, and Western Australia.

Get started with cycling in Newcastle.

We still see improvements in bicycle designs as cycling continues to flourish as a sport and recreation. Many people agree when we say that the best way to discover the world is on two wheels.

Do you also want to feel the adrenaline rush cycling can give you? It’s easy to get started. All you need is to have a bike and learn how to ride it. Stead Cycles is one of the most reliable bike suppliers in Newcastle. We will provide you the best bicycles and accessories for your next adventure. Contact us today or visit our shop in Beresfield!